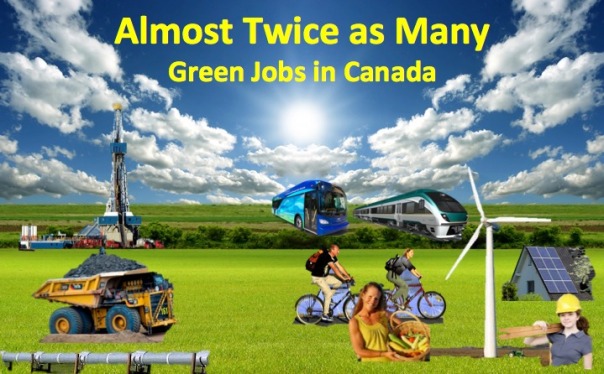 The 48-Page Report is here.

Is It Really True?

Is it really true that if we don’t build more pipelines and allow more exports of coal, oil and gas, that Canada’s economy will be in danger and unemployment will rise?

That’s certainly what we are frequently told, both by the Conservative federal government and by several provincial governments, either directly or by implied assumption.

There is alternative, however. The climate crisis is inescapably real. It threatens everyone’s future, and it is being caused by carbon emissions from the same fossil fuels that our governments want to expand.

So what would it look like if there were an organized plan to phase out fossil fuels and embrace 100% renewable energy in Canada? That’s certainly what the climate crisis calls for.

Denmark has agreed to achieve 100% renewable energy by 2050

Denmark has agreed to achieve 100% renewable energy by 2050. The Japanese province of Fukushima has pledged to do so by 2040. Hawaii may also get there by 2040. At the G-7 Summit in Germany in June 2015 Britain, Germany, France, Italy and the US were all willing to sign onto a call for decarbonization by 2050. Only Canada and Japan said no, agreeing to a phase-out by the end of the century instead.

New research, published by The Practical Utopian in a report titled Almost Twice as Many: Green Jobs in Canada in the Transition to 100% Renewable Energy, shows that if Canada was to undertake a planned twenty-five year transition to renewable energy it would generate almost twice as many new green jobs as the number of fossil fuel jobs that would disappear. By the end of the transition there would be as many new permanent green jobs as there are jobs in fossil fuels today.

In an economy with 19 million jobs, fossil fuels support 550,000 direct and indirect jobs, the wages from which support 245,000 induced jobs, for an approximate total of 800,000 jobs. 4% of Canada’s workers depend on fossil fuels for their income. 96% of Canadians work in other fields.

The transition to 100% renewable energy would have ripple effects across the economy, but most of the new jobs would be generated in four sectors: electricity, buildings, transportation and farming.

Where Do the New Green Jobs Come From?

To generate electricity, we would need a major expansion of wind, solar, geothermal and other forms of renewable energy, supporting 127,000 direct and indirect jobs and 90,000 induced jobs.

To retrofit most of Canada’s buildings to use less energy, and to phase out oil and gas for heat in favour of heat pumps or district energy, we would need a major building retrofit effort across the country, supporting 93,000 direct and indirect jobs and 31,000 induced jobs.

If we were to invest in a country-wide network of safe, separated bike lanes, enabling up to a quarter of our personal trips to be made by bike (including electric bikes), based on Europe’s experience, the investment would support the creation 5,000 new jobs a year, mainly in cycle tourism, rising to 125,000 jobs by the end of the transition.

If we were to expand the use of transit and LRT in Canada’s communities at half the level planned for Metro Vancouver in the defeated plebiscite, this would generate in 37,000 jobs a year from the capital expenditure and 18,500 jobs operations and maintenance jobs at the start, rising to 462,500 jobs by the end of the transition.

If we were to electrify Canada’s railways, phasing out the use of diesel, the work of electrifying 50,000 kilometres over twenty-five years would generate 14,000 direct and indirect jobs a year, plus 6,000 induced jobs.

Conventional farming depends on the use of natural gas to make fertilizer, so the switch to 100% renewable energy would mean a switch to organic farming, which supports 32% more workers on the land. Such a change would generate 4,000 new permanent jobs a year, rising to 100,000 jobs by the end of the transition.

By the time the transition was complete the building retrofit jobs and the renewable energy installation jobs would end, but the cycling, farming and transit operating jobs would continue, and the cycle of infrastructure renewal would begin for the solar, wind and geothermal and railway installations. Taken together there would be 876,000 new permanent green jobs, compared to the 850,000 jobs in fossil fuels that would have ended.

The detailed 48-page report has been researched and written by the BC author and ecofuturist Guy Dauncey, with support from the BC Sustainable Energy Association, and is backed by over 100 referenced sources.

Almost Twice As Many