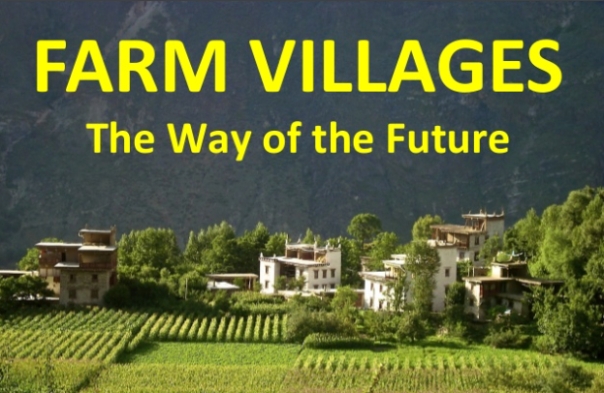 For an illustrated slideshow on this proposal, see https://www.slideshare.net/GuyDauncey/farm-villages

Throughout the world, in every culture, farmers have lived and raised their children in small farm villages.

Here on Vancouver Island, 95% of our food is imported every day on the ferries. At the same time, good farmland sits empty or grows hay, while younger people who want to get onto the land to grow food are unable to do so because of the incredibly high price of land.

The purpose of the Agricultural Land Commission is:

Of the land being farmed, only 239 hectares are being used for vegetables, berries, grapes and other horticultural food crops – 3% of the farmland. The valley imports between 89% and 95% of the food consumed locally.

Gross farm receipts average $61,797 per farm, but the average farmer only keeps about 8 cents of every dollar sold, resulting in an average annual income of $4,606 per farm, including all overhead costs. And in 2011, when the Alberni Valley Agricultural Plan was written, the average farm operator was 55 years old; so maybe he or she is 62 years old today. Using small-scale intensive organic horticulture, by contrast, farmers can earn to earn $25,000 to $60,000 per acre per year.

To quote: “Despite this, demand for local food has never been stronger. Consumers want to buy food they trust from people they trust. The Alberni Valley has experienced farmers and quality soils. There are opportunities to increase direct-marketed products to local consumer and tourists. … food for thought for developing a vision and plan for agriculture in the Alberni Valley.” Alberni Valley Agricultural Plan, 2011-2031

The proposal we are offering is that on any farm above a certain size, one acre (for instance) can be rezoned as a Community Farm Village, with additional acreage being leased or sold for farming purposes on the strict condition that the residents of the new Farm Village obtain their income from farming the land and associated value-added farm products and services.

Principal use agriculture. Residential use ancillary, homes limited (eg) to 1500 sq ft. ‘Farming’ defined to exclude principally forage or hay. The first acre per household not for forage, horses or hay. On subsequent acres, no more than 50% of the land can be used for horses, forage or hay.

A Community Farmland Restrictive Covenant would require that the land be used for farming, signed by a third party (eg a Farmland Trust) which would monitor the lands to ensure they were used for farming. The owners would be unable to break the covenant, since the role of the third-party covenant holder would be to uphold the covenant.

The strata council (required by covenant) would oversee the farming operations, with forgivable strata fees for farming. If the owners choose not to farm, significant strata fees would be charged and used to pay for others to farm the land. Strata fees would also be collected to fund common facilities, greenhouses, irrigation, cool storage, a processing kitchen, etc.

In British Columbia the Local Government Act enables local governments to register housing agreements which can restrict housing to “classes of persons” (sec 905 2) b), LGA). This may be used to restrict the residential units to “farmers” and their families.

The resulting Farm Village could be a self-governing community strata-title, with the houses and land being owned privately, cooperatively, or by a Community Land Trust with the Trust owning the land and keeping it off the market forever and the farmers owning their houses.

The farming operations could be run as a cooperative, a joint farm business, or as separate farm partners, to be determined by the new farmers. Their incomes would come from any farm-related activities permitted under the ALR rules.

The Farm Villagers would buy or lease the acre of land from the farmer to build their village and the land needed to farm. The value of such farmland would be far below the normal market price, since the four levels of planning control would limit the market to buyers who plan to farm the land under these pretty strict conditions.

The acre for the clustered village might sell for $100,000, costing five families $20,000 each. They would also each need to build a small home, pay for a road, water, sewage and power, and buy or lease the additional farmland on which to farm.

If the zoning permitted it, some of the farmers might begin by living in a Tiny Home with a composting toilet, greywater treatment system, and off-grid power to reduce costs.

Request to the ALR Advisory Committee

We would like to propose words to this effect in the Committee’s recommendations:

“To encourage more farming, we would like to see ALR land used for the development of small, tightly clustered farm villages on very limited acreages provided that the residents of the villages are constrained to obtain their incomes from farm activities by means of a Community Farmland Zoning Bylaw, Community Farmland Covenant Registration, appropriate Strata Farm Fees, and the Registration of a Housing Agreement.

The Committee recommends that a Task Force be charged with writing Model Rules for the development of such a Farm Village on ALR land, obtaining public input and presenting a final proposal to the Minister of Agriculture.”

Guy Dauncey is an author, organizer and eco-futurist. He is a Fellow of the Royal Society for the Arts, and an Honorary member of the Planning Institute of British Columbia.

Rob Buchan has served several communities in British Columbia in a planning and administrative role. He recently completed his PhD in the area of food system planning. In 2009, Rob was elected to the College of Fellows in the Canadian Institute of Planners. Rob’s work has received 19 awards of excellence in the areas of Agricultural Planning, Affordable Housing, Downtown Revitalization, Interface Fire Hazard Management, Greenway and Trail planning and Public Engagement.