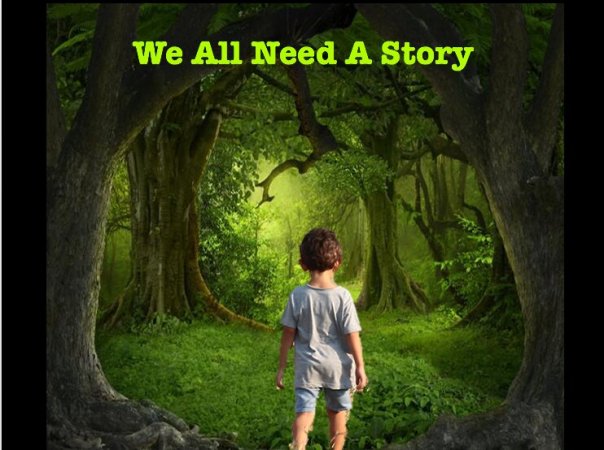 A persuasive story is an essential piece of equipment for a determined journey. Here’s the story I use to keep me rolling along.

Once upon a time, a long, long time ago, before what we call the Universe existed, there was something, let us call it ‘being’ with a small ‘b’. Being expressed itself first as space-time and then as matter, becoming being-matter. It’s as good an explanation as any. Paul Sutter, a well-known astrophysicist, says “In the beginning there was a question mark.”[i] Stephen Hawking said in the beginning there was a singularity without time or space, but he couldn’t explain how it got there.

Over many aeons, being-matter organized itself into atoms, cells, and living creatures. The creatures evolved, growing in complexity so much that one creature, the one we call human, had thirty-seven trillion living cells, all interacting in a coherent self-organized manner. This suggests that somewhere among the secrets of the Universe there is a process we do not yet understand by which being-matter seeks greater complexity, and with greater complexity comes greater consciousness, and greater capacity of the mind to ask questions, to try to understand what the Universe is all about.

The Essential Role of Agency

Every human has consciousness, so deduction tells us that all members of the shared evolutionary family tree also have consciousness, at least in some rudimentary form. What each creature fills its consciousness with depends on a host of biological and other factors, but there’s no denying that we have it. It gives us agency, and the experience of free will. The denial of agency by domination or oppression is something we resent and resist by the nature of being alive. Being free and alive brings joy. Being oppressed does not.

Our ancestors lived in the forests of Africa, where for reasons of survival in a biologically competitive world they were dominated by powerful alpha-males. The domination was effective, which is why it persisted as a system, but the non-alphas resented it. They hated being bossed around, for being loves agency, and the freedom it offers.

Then one day our ancestors discovered that if they ganged up on their alpha-males with spears they could defeat them, and either kill them or drive them from the clan. In the generations that followed they taught themselves how to enjoy a cooperative, egalitarian existence as hunter-gatherers without alpha-males, taking care to suppress the tendency to self-importance, knowing that if it was allowed to grow it could awaken the ancient impulse to dominate.

The Loss of our Cooperative Culture

Over time, however, the animals they hunted grew scarce, due either to the changing climate or the effectiveness of their cooperative hunting techniques, or both. Faced with hunger, they learnt how to grow their own food. This enabled them to harvest more than they needed, so people began storing food privately, and in this way some families grew wealthier than others. As the years passed, their children inherited their wealth, and they came to believe that they were better than other families. As the population grew because of the extra food the ability of the clan to suppress self-importance grew weak, and one day they awoke to discover that a new alpha-male had assumed control. They were back under the domination their ancestors had worked so studiously to suppress.

Many years passed, and the alpha-male leaders fought with each other to prove who was the most powerful, causing much war and conflict. Some tribes grew so powerful that they became kingdoms, some kingdoms grew so powerful that they became empires, and some kings and emperors grew so powerful and self-important that they committed terrible crimes against their people and those who they conquered. Resentment and dislike of being dominated never went away, however, and the desire to live peacefully and cooperatively was always present, revealing itself in frequent rebellions and uprisings.

The food surpluses brought one big advantage, however: they gave people the opportunity to specialize, enabling some to become artisans, traders or scholars, instead of just peasant farmers. Some people were curious and invented new ways of doing things such as the wheel, the stirrup and the written word, and a thousand more things that people quickly embraced.

The Return of our Cooperative Culture

Two or three thousand years ago some people in Greece who were fed up with being dominated began to organize themselves cooperatively, and in so doing, they invented the world’s first democracy. Several religions also sprung up expressing the idea that everyone was worthy of love and respect, since we were all children of the same God. A thousand years ago cooperatively-minded people in Northern Italy invented city communes, temporarily replacing rule by feudal aristocrats.

In North America, tribes that were members of the Haudenosaunee Confederacy developed their own democracy, with decision-making by consensus rather than by domination and decree. Over time, the courage of the ancient desire not to be dominated grew. People who preferred cooperation to domination were instrumental in creating the Reformation and the Enlightenment. Economic progress took off, and while societies were still dominated by those who owned the most land and the most money, cooperatively-minded people created cooperatives, cooperative banks, public money, public banking, self-help groups, labor unions, public education, democracy, public healthcare, and in the late 20th and early 21st centuries, a proliferation of community economic initiatives in the villages, towns and cities where they lived.

At every step of the way, people had to fight the power and entitlement of the dominating elites, but their persistence paid off. In the late 20th century, however, people who believed in their right to dominate seized back control wearing the cloak of neoliberalism. Those who owned and controlled capital used it to influence the way the global economy developed, causing many who wanted to live cooperatively to lose hope, while others felt anger and resentment that was tribal, racist and nasty. And all this while, both the dominators and the dominated were almost completely ignorant about their planet’s ecosystems, allowing terrible losses and damage to occur to other creatures and to Nature as a whole. Many blamed the dominators, and their determination to squeeze a higher return on their capital, which was true, but almost everyone was involved through the way they shopped, consumed, banked and invested, the jobs they worked at and the way they voted.

The Trouble with Physics

There was a third difficulty, in addition to domination and ecological ignorance, for the scientific method, by means of which humans had uncovered so many secrets of nature, was still confused about the nature of consciousness, and whatever it was that caused being-matter to evolve complexity. Most scientists believe that it had happened by pure chance, without agency or consciousness. The entire Universe, they believed, would ultimately cool down and collapse into nothing, following the Second Law of Thermodynamics, also known as the law of entropy, which states (as Professor Stephen Hawkins puts it) that disorder always increases with time.[ii] This allows no room for long-term hope or purpose apart from make-believe purposes to keep us cheerful. It also denies any role to consciousness and agency.

This triple problem caused many to despair. And yet original being remained within us, giving us life, consciousness, agency, and the stubborn belief that a better way of life could yet be crafted for all of nature, including humans, restoring the egalitarian, cooperative life our ancestors enjoyed.

Some who questioned materialistic scientific thinking, who believed that being did indeed play a role, hypothesized that there must be a second tendency at work alongside entropy. They named it syntropy, defining it as a self-organizing tendency within being-matter that operates through consciousness, always seeking greater order and wholeness, whether as atoms choosing to become molecules or humans choosing to live cooperatively. This provided reason to believe that the deep desire to cooperate without domination might be associated with the most ancient desire of all, to unify by cooperation, dating back to the origin of the universe.

In the 21st century, faced with ecological and climate catastrophe, there was a great awakening as people organized a million groups to protect nature, tackle the climate crisis, defend democracy, empower women, end racism, change banking and investment practices, develop a green economy, grow local food, build affordable housing, win respect and rights for the LGBTQ community, win respect for people of color, and so much more.

This great awakening was not organized by any political party: it was far larger than that. It was the global expression of a deep instinctive desire for a better life, a new economy beyond capitalism, and a new ecological civilization. With this awakening a new hope was born, and a determination to build that better world.

Guy Dauncey is the author of Journey to the Future: A Better World is Possible, and the author/co-author of nine other books. This is an extract from my forthcoming book The Economics of Kindness: The Birth of a New Cooperative Economy.

4 thoughts on “What’s Your Story? Mine is Very Old”