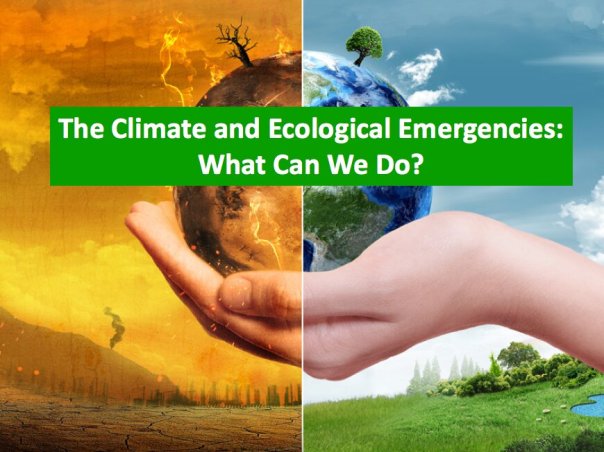 There are massive forest fires in Siberia. Greenland’s melting is accelerating. Record heatwaves are roasting Europe. The world’s insects are dying off. The scary news keeps accumulating.

We are living on the edge of an emergency that is just getting started, and climate is only the half of it. There’s also an ecological emergency. How are we to respond? It’s easy to slip into complacency, or to be overcome by fear, followed by a sense of impotence. You know the crises are real, but the children are coming to visit, there’s a holiday to plan, and don’t get me started on the problems we’re having at work.

The first step to end complacency and neutralize fear is to put the crisis on your weekly to-do list:

If you can organize a household meeting, so much the better. The possibilities for action then fall into three simple categories: political action, household action and community action. All are needed. Choosing any one of the three is good.

Political action is so much easier if you do it with others, either by joining a local climate action group, or if one doesn’t exist by forming one with friends, putting the word out among your friends on on social media. Once your group is are sitting around a table, the question becomes “What shall we do?” The possibilities are many, and they can easily feel overwhelming. So here’s a list to help you choose a goal you can agree on:

One person eating less meat and buying an electric car might not make much difference, but if we use this as an excuse for doing nothing we will be personally responsible for the dark future our children will have to suffer.

I have written a Household Action List  with the intention that over five years, every of us should make the transition to becoming 100% climate and ecologically-friendly. So when you come to ‘tackle the climate crisis’ on your weekly to-do list, you can consult the list and choose a priority for the week, knowing that you have five years to get everything done. See below and here in a one-sided printable form: Household Action List

Over the next five years the price of electric vehicles will fall, support for home retrofits will improve, and most of the actions on the list will become normal. Here’s an incentive to go ahead and buy an EV. In a KIA Soul EV, it costs just $15 drive 1,000 kilometres, and the annual servicing charge is $59.95.

To tackle the emergencies with the urgency that’s required we are going to need massive citizen engagement, street by street, block by block. In Britain, during World War II, victory would not have been possible without the millions of people who volunteered to join the Red Cross, the YMCA, the Women’s Voluntary Service, the St John Ambulance Brigade, Oxfam, and the Home Guard, which by June 1940 had 1.5 million volunteers.

We need to imagine local climate and ecological emergency organizations whose volunteers are trained to visit every home on their block and to invite people to kitchen-table meetings. The goal of the meetings would be to people get to know each other, show them the Friendly Footprint list, help them decide what to do, and call on them every so often to ask how its going. With organization, each volunteer could have shared access to a thermal imaging camera that neighbors could use to show them where their homes are losing heat, and a Kill-a-Watt meter to understand how much power each appliance uses.

A few of your neighbours (6% of Canadians, 2018 Angus Reid poll) may think that the climate crisis is a hoax, but the neat thing about this approach is that it really doesn’t matter. It’s a five-year transition, and during that time a lot can happen. If we just start with the 38% of Canadians who believe that “our survival depends on addressing climate change”, who we’ll be making a great start.

Guy Dauncey is author of The Climate Challenge: 101 Solutions to Global Warming (2009) and Journey to the Future: A Better World is Possible (2015). http://www.thepracticalutopian.ca

The Climate Challenge: 101 Solutions to Global Warming , by Guy Dauncey (2009)

Drawdown: The Most Comprehensive Plan Ever Proposed to Reverse Global Warming, by Paul Hawken (2017)

This is Not a Drill: The Extinction Rebellion Handbook (2019)

No-one is Too Small to Make a Difference, by Greta Thunberg (2019)

Eradicating Ecocide: Exposing the corporate and political practices destroying the world and proposing the laws needed to eradicate ecocide, by Polly Higgins (2010)

The World is Blue: How Our Fate and the Oceans Are One, by Sylvia Earle (2010)

Enough is Enough: Building a Sustainable Economy in a World of Finite Resources, by Rob Dietz and Dan O’Neill (2013)

The Sixth Extinction: An Unnatural History, by Elizabeth Kolbert (2014)

Prosperity without Growth: Foundations for the Economy of Tomorrow, by Tim Jackson (2010, 2017)

Eating Tomorrow: Agribusiness, Family Farmers, and the Battle for the Future of Food, by Timothy A. Wise (2019)

A Climate and Ecological Emergency

2 thoughts on “The Climate and Ecological Emergencies – What Can We Do?”